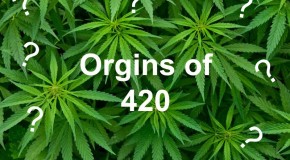 The Origins of 420 It’s almost that time of year again.  Spring starts springing, the birds are chirping. That can mean only one thing, 420 is almost upon us!  The “high holiday”.  There is

It was in October of 1937 that the federal government passed a law making it illegal to grow, possess and use marijuana. It has been classified by the DEA as a level one substance,

The Failed War on Drugs Infograph

Cannabis and Spirituality: The Rastafari Movement

Probably everyone reading this knows the words to at least one Bob Marley song. But do you know what he means when he refers to Jah, Zion and redemption? What about those dreadlocks?

Marijuana: A Schedule I Drug

Tetrahedracanabinol, commonly referred to as THC, is the main psychoactive chemical compound found in cannabis.  Now how would you go about labeling this type of drug? Since the Controlled Substances Act came into legislation

Video Timeline: The History of Marijuana

The earliest recorded use of cannabis dates back 10,000 years to an ancient village in the island of Taiwan off the coast of mainland China. The Chinese would use the cannabis hemp plant to